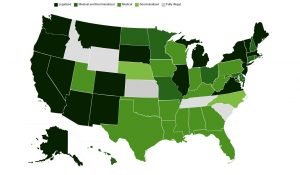 Critics debate that we may not see recreational marijuana legalized on a Federal level until 2024. The question isn’t ‘if’ but ‘when’. This is the time for big and small business to prepare to Capitalize on Cannabis! There is still a lot of progress to be made, but the people are pushing for the legalization, and in many states it is already legal on a local level. As you can see by the map produced by DISA Global Solutions, 25 States have become ‘Fully Legal’ when it comes to Marijuana. The map also shows only 5 States that are still ‘Fully Illegal’.

How far Cannabis Sale and Medical and Recreational uses have come 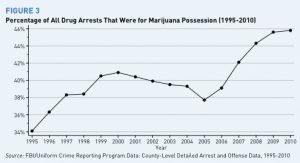 The federal government first regulated marijuana in 1937 when Congress passed the Marijuana Tax Act. This was a tactic used to regulate drug use without making it ‘illegal’ because this was believed to be less susceptible to legal challenge. However, it essentially outlawed the sale of cannabis.

Then, in 1970, Congress passed the Controlled Substances Act, which established categories into which they placed drugs  depending on their perceived usefulness in medicine and potential for abuse. Schedule 1, the most restrictive category, contained drugs that the federal government deemed as having no valid medical uses and a high potential for abuse. The US categorized Cannabis as Schedule 1.  Two years later, the Shafer Commission, appointed by Nixon, recommended that marijuana be decriminalized. This would ultimately remove it from the Act completely. Nixon, however, rejected his own Commission’s report.

Through multiple avenues including Medical Research, recreational utilization and social acceptance, Marijuana took the spot light again in the eighties. Activist groups like the National Organization for the Reform of Marijuana Laws (NORML) formed. They promoted and coordinated grass-roots efforts to legalize medical marijuana at the state and local levels. This brings us to where we are today.

Where Cannabis Legalization is Now

Now, these efforts extend beyond the medical uses. Cannabis’ successful campaigns in several states lead to legalizing its recreational use. Many Americans praise these efforts as a triumph of average citizens over a politicized legal system. A system that imprisons large numbers of nonviolent drug users unnecessarily. A failed War on Drugs. An unresponsive regulatory regime that denies easily acquired relief to suffering patients.

What should we be concerned with Cannabis Legalization

Some think these claims and this unique path to marijuana’s legalization brings unique problems. They believe that without proper scientific study and medical trials there can be no clear and reliable guidelines for the drug’s administration. There would be no indications of potential side effects from prolonged use. Critics question whether the medical marijuana movement’s immediacy and disregard for research protocols reflects humanitarian concern. Is this for suffering patients or profit seeking producers and distributors?

Many medical associations are hoping to remove marijuana from Schedule 1 to permit further study. Rather than merely saturating the market with non-regulated products for quality or potency. Smoking marijuana remains the primary mode of ingestion. Physicians and scientists believe medical users exposed to a variety of health threats because of it.  There are hundreds of chemical compounds inhaled in cannabis smoke. Though medical marijuana advocates may be justified in their enthusiasm, only time will tell. Will this path to legalization represent the unmitigated good they believe it to be? If it is… then we need to be ready to capitalize on the cannabis market.

How do we Capitalize on Cannabis when it is Legal?

This of course depends on your industry, but if you think you have an idea of how your company can jump on board, I say test it. Custom Equipment Company is sending out fliers with some of our products that may be helpful including shelving, racking and packaging materials. Because we have such a wide variety of products, we can pick and choose which ones would work best.

Perhaps you are a bakery and you could research the legality behind baked goods containing cannabis. You won’t know until you try. Perhaps it is looking at the legality of allowing smokers in your restaurant or giving them specified areas. It might even be as simple as prepping your HR for when recreational use becomes a thing. You’ll need to check those policies so they’re ready.

Let’s double down before we miss the opportunity. As we grow on to a Brighter Tomorrow.