A Word for the Season of Giving

Too often, we are fed all of the bad news and very little of the good. But it’s the good news that makes us smile. The good news is what makes life worth living. Renewed faith in humanity and restored purity in a society that feels overwhelmingly dark. So here are a few short stories of people across our country who acted in kindness from Hearts of pure Gold!

A Wish Spent For Others

Javier Amos was nine years old when he was diagnosed with lymphoblastic leukemia. As they do, the “Make A Wish” foundation reached out to grant Javier his. Most children want to take a trip or be greeted and hang out with their favorite celebrity or Superhero. Javier, did not ask for that. Instead, he wished for a Pizza Party for his entire Elementary School!

The whole school, one Friday afternoon, gathered to form a tunnel of appreciation to Javier’s gesture of kindness. Jo Evenson, who heads “Make A Wish” in South Dakota, attended the event, and he said he had never seen anything like it before. Javier had his own honorary procession through a tunnel of his peers and teachers shouting happy words of thanks and encouragement. The school ate pizza and played on jump houses and jungle gyms for the last two-hours of their educational day, before going home in their school buses.

Most children would have asked for something for themselves, but it takes a true “Heart of Gold” to ask for something that benefits everyone else. Javier Amos is now eleven years old and in remission. 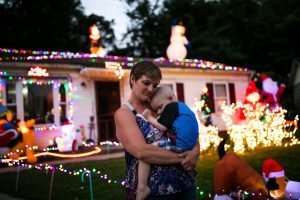 The Allen family was given the worst kind of news imaginable.  Brody, their two year old son, was given mere weeks to live due to brain cancer. This was September, and his parents knew he would never make it to his favorite holiday—Christmas. So the couple decided to begin decorating their yard and home like they would for Christmas, giving Brody one last ‘winter wonderland’. Brody helped his mother decorate the tree and they supervised his father as he strung the lights on the porch and overhangs, hung the wreaths and set up the light-up decorations in the yard. Heartbroken, his family choked back their own emotion to make sure this was the best ‘Christmas’ their son could ever ask for.

Soon, to the Allens’ surprise, the neighbors began to decorate as well. (Revealing their true Hearts of Gold) Every home got involved stringing lights and setting up trees and other outdoor decorations. Eventually the entire neighborhood was decorated. From rooftop inflatables to fake snow sprinkled across the lawns, Christmas had come in September for Brody. As parents, you do what you can, but the neighbors going over and beyond made this boy’s last holiday a special one.

Brody Allen lost his fight with brain cancer less than a month later, 2 weeks before Halloween. But his story and the love that his neighbors showed will live on in us. Christmas doesn’t have to be one month out of the year.

An Angel. An Icon. 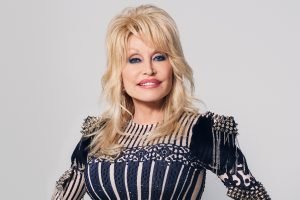 An icon. A legend. A performer. An Angel. Dolly Parton is all of those things and more. She has done good for those around her out of love, more so than most of the world. Her name should be written in the stars with other ‘Angels’ like Mother Theresa and Lottie Moon and all of the Saints. She gives and gives and finds ways to make that giving go further!

In 2016, a wildfire ravaged the Great Smoky Mountains in Tennessee. Hundreds of citizens were left homeless, displaced and without the essential needs to survive. Dolly immediately launched the ‘My People Fund’, promising to give families like these $1,000 per month stipend until the catastrophe could be sorted out. Dolly called on other artists to help raise money by doing concerts and events. Through these efforts they raised nearly $10 million caring for the needs of 1,500 families and nearly 5,000 individuals. The foundation also partnered with the Mountain Tough Recovery Team to give another $3 million in additional support through the months that followed.

Lives were saved and hearts were warmed through that dark, cold winter, because Dolly Parton exemplifies those with Hearts of Gold. And she continues to do God’s Work in this world… 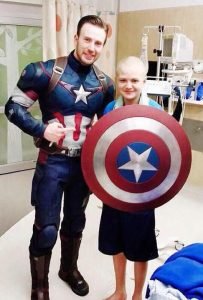 A real life Superhero, Chris Evans played Captain America on the big screen for the Marvel Cinematic Universe. But in his day to day life he is just as much a Superhero for the people. From rescuing a dog on a movie set to making virtual calls to young people to encourage their own acts of kindness, Chris Evans goes far beyond his call of duty.

Most memorable, however, was a few years ago when Evans teamed with co-star Chris Pratt who played Starlord in Guardians of the Galaxy, to visit a children’s hospital in Seattle. They went in full Superhero costumes, Chris Evans even sported his shield. Needless to say, the kids were over-the-moon excited for the visitors who certainly sparked their spirits that day.

On Twitter, Chris posted a picture of him with one of the children he visited. Writing, “AMAZING day at @seattlechildren w @prattprattpratt. Met some TRUE super heroes! Feeling inspired, blessed, touched. Thank you w all my heart.” His Ex-girlfriend, Jenny Slate, said it best, “… if you could paint his heart, it would probably be golden.” And that’s something coming from an ex. Yet another example of celebrities with hearts of gold!

A Gift that Keeps on Giving

Cameron Lyle, college sophomore at the University of New Hampshire, was hanging out with his friends in the cafeteria when a few players from the football team playfully jested with him to sign up at the ‘Be The Match’ station for Bone Marrow Donorship. As most Sophomores would, he was easily pressured into the simple task and with a cheek swab and a signature, he was an official donor.

Throughout his next two years of college, Lyle made a name for himself in Track and Field taking home silver medal after silver medal and positioning himself to really ‘go for the gold’ his Senior year. Poised to take the gold in shot put at the conference championships in May, Lyle readied himself for victory. And then he got the phone call. He was a match.

“When I got the phone call, I was so shocked,” said Lyle. “I totally forgot I even signed up a couple of years before. Even then, I did not think I would be a match. The odds are so ridiculous.”

Additional testing took place to confirm he was a definite match, and when it was discovered that he was, they immediately set him up for surgery. But there was an issue. The surgery was set for April 25th, just one short month before the conference championships.

Bone marrow transplants are no walk in the park. They are intense, especially the one he was having done, and if he went through with it, he would have to sit out of the championships as well as the rest of his Senior season of sports. Terrified to tell his coach he took a breath and just spat it out. He found that his coach was much more supportive than Lyle could have imagined. His coach told him, “If you have the chance to save a life, do whatever it takes.”

Lyle’s choice did just that. He saved the life of a 28 year old man who had been diagnosed with lymphoblastic leukemia a few days before Christmas in 2012. The man was a father of nineteen-month-old daughter and was set to be married. But it was not only one life that was changed. After the donation, he was given the NCAA Award of Valor which brought streams of news media to the cause. Registration to the National Marrow Donor program tripled so that those who need Bone Marrow transplants might find their match too.

Cameron is proof that we can all be donors, whether of blood or bone or simple kindness. We can all have hearts of gold!

A Call to Activate your Heart of Gold

So what is the difference between these people and us? Is it that, within their chest, there actually IS a heart made of gold? No. We all have the potential to be good, even GREAT. The only defining difference is that these people DID. They chose to act in kindness. They did things that were within their power to accomplish, but that would also make the highest impact. So don’t forget, this Christmas especially, to look around at the needs of others and find the ways to best ‘activate’ your own heart of gold. We are all in this together, as we look forward to a brighter tomorrow!