Level One: Leaders by Claim 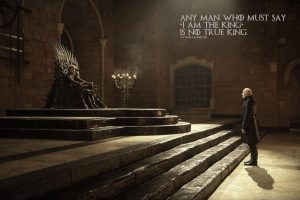 This first level of the Hierarchy of Leadership is the lowest level, but also the most common form of leadership. It happens when the highest levels or decision makers, feel the need to fill a role with the easy choice. Sometimes they lose the former leader and have to pull up the next in line. That person isn’t always ready, and so they have to claim or seize their authority.

Listen for phrases like, ‘Because I said so’ or ‘I don’t need to explain myself’. The person or people who use these phrases are typically on this level of leadership. They often struggle to explain their decisions and feel ‘attacked’ if people question anything, even inquisitively. Leaders who have to claim their authority, aren’t much of a leader, after all.

“Any man who must say, I am the King, is no true King.” Tywin Lannister of Game of Thrones 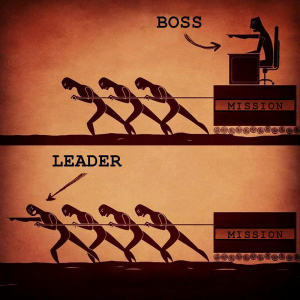 This principle is best seen in the image here. The ‘Boss’ is Level one Leadership. The ‘Leader’ is Level two Leadership. And they may both get the mission accomplished, but the ‘Boss’ will do it while screaming and pulling out their hair. Their subordinates will finish the work, angry and frustrated and ready to quit.

The ‘Leader’ will complete the task with a team who is excited and ready to take on the next mission! They will follow because they see a leader who is willing to get their hands dirty doing the work. A leader who is there to direct them as well as take on some of the load when it is too much for the team to handle alone.

It is important to realize that this level of leadership should be level two and level one combined. Their leadership capabilities come from level two, but they should also have the title to go along with it. This isn’t always the case as there are extenuating circumstances.

In this Hierarchy of Leadership, Level three is a Leader who Coaches. This tier should be, again, someone who also has Levels one and two in their repertoire. It isn’t a necessity, but without the title and the service attitude, they will not be fully equipped to Coach the team forward.

That being said, a ‘Coach’ is one who leads with encouragement and good advice. The reason this is a level three form is because people don’t care about what you say if they don’t see what you do. Tell your employees everyday how important it is to follow the Standard Operating Procedures, but if you don’t follow them, why should they? (If you say ‘because I said so’ or ‘those don’t apply to me’ you might want to check yourself.)

I think back on my Football Coaches. They wanted to win, but they also understood each of our limits as it pertained to the sport. Here are some Football Coaching Points I received that translate nicely to the workplace.

Lastly, in this Hierarchy of Leadership comes the Alpha Level of Leadership. This level gains followers because of the personal character of the leader themselves. Sure, they probably have a title and a service attitude. And, yeah, they are probably the best for coaching. But no one even thinks about those things because this leader is respected. Why? Because of who they are and what they mean to those who follow them. They embody things like kindness, goodness, encouragement and positivity. They have characteristics that form who they are at their core. Attributes that we look to emulate like compassion, vision, strategy and wisdom. People look up to and strive to be like this person. They follow them because they know this type of leader cares, and so they care about this leader.

Without falling down a rabbit hole, I will say that this is the type of leadership that changes the world.

Religious leaders had many of these same qualities. Many of them even spoke of these qualities and tiers. And, I don’t know of any leaders who would disagree with any of these four levels. Maybe they would add to them, but at the core, I believe this is the ladder we should strive to climb.

So let us climb it ourselves, as high as we need to. And then, let us lead by example, coaching others to climb the ladder also. Be willing to reach down and help them. And for those who might be hanging out at Level one… it’s time to move up the ladder, or step down completely. Forward motion is necessary as we move forward to a brighter tomorrow!